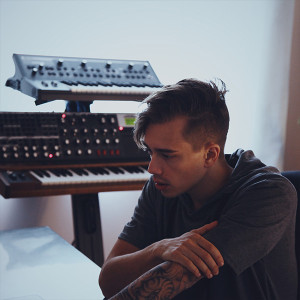 CNN recently reported that “Electronic Dance Music (EDM) is a $6.2 billion industry” and “the fastest-growing music genre out there.” Through cult-like followings on social media, hundreds of worldwide festivals, radio airplay, and collaborations with pop artists, EDM artists continue their foray into and beyond the mainstream.

One of these artists is Willem Rebergen, better known to his 172,000+ followers on Instagram as DJ Headhunterz. Rebergen kicked off his career in 2006 as a DJ and music producer, and quickly grew into one of the biggest names in the industry, recently performing at several major festivals, including Electric Daisy Carnival and Tomorrowland.

After eight years making hardstyle music, Rebergen was ready to tackle a new challenge. “Right now I’m translating my signature sound to something a bit different from what I used to do but I don’t necessarily want to settle in a single genre anymore,” he states. “I want to feel free to go where my heart wants to go. Everything changes—and so does my personal taste, so listening to that is the only way for me to keep tapping into my full creative potential. Who knows what I might make tomorrow?”

We recently chatted with Rebergen about where he wants to take his music, his creative process, and working with Studio One. “I have been using Studio One for about two and a half years now and I am currently on version 3,” Rebergen states. “I make EDM, so I would say I use Studio One for composing and sound designing. I basically use it for anything necessary to produce a song.”

A longtime Logic user, Rebergen was turned on to Studio One by a recommendation of a very wise friend. He was immediately hooked. “I had been on Logic for years, but became unsatisfied with the lack of development of the software since Apple bought it. I felt it got behind compared to other more forward-thinking companies making DAWs,” he asserts. “I tried Ableton but that wasn’t exactly what I was looking for either. I was excited to give Studio One a go—I’m always eager to test new software, I’ve always been kind of a nerd, honestly. Looking for the next thing that improves workflow or sound quality. Studio One immediately felt natural to me, it really didn’t take me long to get used to, and I think especially for people coming from either Logic or Cubase it will feel very intuitive right away.”

“When I started using Studio One, I was very happy to feel back in control of my audio editing. The cutting tool felt very “direct,” and I loved the slip editing tool which I didn’t have before. Automation was as tight as it could get, and very quick and convenient—which was also one of the reasons for my switch. That is how automation should be! When you make electronic music I often want to be very surgical with drawing in automation, and Studio One simply allows for this at all times, even under the pressure of latency-inducing plugins. Latency compensation is always on point!”

Another feature that made me fall in love with Studio One was Track Transform. It’s so much more flexible than in any other DAW that I know of, and opens up a whole new spectrum of working with content that otherwise would be literally frozen and untouchable.

“Furthermore, I have been working more quickly in Studio One than ever before. The browser changed my way of working completely, and motivated me to create a perfect personal library where all my hard work is stored and ready to put back into action. When I create a sound in a soft synth, I create a Musicloop by dragging it into my browser. This saves not only the synth preset, but also the MIDI sequence and effect Plug-ins. It even lets me play a preview when I select it in my browser, so I know exactly what I’m about to drag into my project. I could not think of a more convenient way to browse through my self-made sounds.”

“All of these functions have made it possible for me to feel much more creative while being in the actual creative process, and not being pulled out of it by having to search endlessly for that particular sound I’m looking for, or having to work around functions that are not doing what I want.”

“I also create a lot of macros to improve my workflow, I’m totally in love with the new arranger and scratchpad function which allows for me to be much quicker and intuitive when arranging my songs without making a mess.”

As a full-time producer, Rebergen’s working knowledge of Studio One runs deep. When pressed for workflow details, he’s much more open than many of his peers. “I recommend that Studio One users make full use of the Browser and the Musicloops,” he opines. “When I finish a song, I completely undress it and save all sounds I made in the form of channel presets, Musicloops, and audio files. With every song I make, my library expands—and whenever I’m in the creative process I can recall any sound I am looking for without having to get into sound designing or endlessly searching through sample libraries. I make sure that every sound I save in MY library is on point, so they rarely need a lot of tweaking to fit into a song and I can just get on with concentrating on the creative part.”

He’s also taken advantage of using other, prehaps modest applications in conjunction with Studio One to accellerate his already blazing workflow. “I keep an app open alongside Studio One called Sticky Notes. I type down all my newly-made key commands—yes, I constantly make new ones! I then force myself to use them all the time so they become a natural part of my workflow. Customizable key commands make everything so much quicker, and Studio One allows for using them for almost anything.”

“Studio One invites us to have the best workflow we have ever had,” Rebergen continues. “I can’t believe I had been able to keep up with making new songs in the total mess I was working in when I used Logic. With every update, PreSonus puts out come fantastic new features which shows that the team is eager to keep pushing forward. They actually listen to what users want, and notice what users have been missing out on while working with other software. Coming from Logic, Studio One  it gave me much better audio editing, better automation, more overview, a better overall workflow. I could keep going…”

And going he is. Rebergen has his hands in a lot of different projects apart from his own. “Currently, I have a collaboration out with R3hab called “Won’t Stop Rocking” on Spinnin Records. Other songs I have released this year are: “Live Your Life” with Crystal Lake and “The Power Of Now” with Steve Aoki. And, of course, some solo tracks, as well.”

Rebergen closes with a shout-out to the PreSonus krewe. “Team PreSonus has the perfect mindset to create the perfect DAW. In my opinion it already is the best DAW out there, and it’s going to get even more awesome, I’m sure. I’m beyond grateful to have Studio One in my life!”