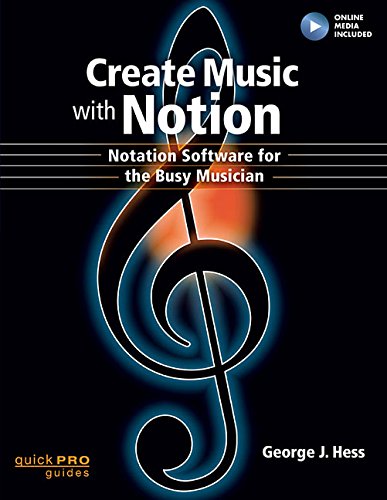 Hal Leonard  has just released a new edition of their Quick PRO guides:Create Music with Notion—Notation Software for the Busy Musician, by George J. Hess. It’s available now—purchase links are below.

The structure of Create Music with Notion is a little different than one might expect from a book of its type. Each chapter is designed as a standalone project, and the reader isn’t expected to take them on in a particular order—or even complete them all. Instead, you’re invited to look at each project and choose which ones most closely resemble what you need to do with Notion. There are step-by-step instructions with shortcut or menu reminders for each project using the provided example.

“For what I do–composing, arranging, songwriting, handouts–Notion meets 95% of my everyday needs,” says George. “It’s the only one where mouse entry makes sense, mainly because you can add articulations, dynamics, techniques and other entries all at the same time. It feels like working with pencil and paper, but with all of the advantages of a computer, like undo, copy and paste, and so on. There’s still step entry and real-time, too.

“Notion’s shortcuts are incredibly easy to learn and it handles most of the layout for you,” the author continues. “In addition, the sample-based playback is incredible. Anything you enter on the screen affects playback. Slurs trigger different samples, articulations, techniques and dynamics including hairpins are played accurately. The guitar technique library is particularly impressive. And to top it off, Notion for iPad is an excellent product, too, and you can share files between desktop and iOS versions.”

“This is an intuitive and approachable book – if only more books on software were written like this!
You can dip in and out of the projects in the book – even if you are a seasoned Notion user, there is much to gain from George’s insights. The section on mixing the orchestra is worth the price alone.”

About George J. Hess:
An award-winning teacher, George Hess is an associate professor at the Yong Siew Toh Conservatory in Singapore where he teaches technology and professional development courses. He writes a regular column for Music Education Asia, has published numerous papers on music technology pedagogy in international and national journals and regularly presents clinics and workshops throughout the world both in person and online. George is an Apple Distinguished Educator, and is a member of the board of directors for Technology for Music Education (TI:ME), for which he is also a certified instructor. His current research interests include project-based learning, music education in developing countries, distance learning via video conferencing. He also performs regularly as a jazz guitarist. Prior to coming to Singapore he taught jazz, theory and technology at Central Michigan University for ten years. Dr. Hess holds degrees from the University of Northern Colorado and the Berklee College of Music.