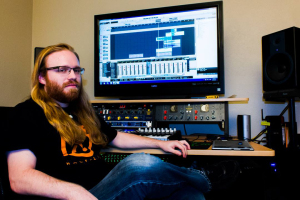 [This just in from Andrew Hulshult, game audio wunderkind and Studio One devotee. He was recently tasked with recording new, “Re-Rockestrated” versions of classic game soundtracks for the companion soundtrack to the new 3D Realms Anthology, a collection of 32 their classic titles. It was a monster task with a tight deadline, but both Andrew and Studio One were up to the task.]

Studio One was a huge help on my work recently with 3D Realms’ new 3D Realms Anthology Soundtrack. The soundtrack includes nine songs from eight games, and it needed to be finished with a tight deadline—tracking, mixing, and mastering all in two months! To make matters more stressful, they were all extremely fast-paced old school MIDI tunes from the 3D Realms back-catalog from legendary old-school composers like Bobby Prince, Lee Jackson, and Mark Klem, just to name a few.

Studio One quickly proved to me that it is still an absolute force to be reckoned with. At one point I had close to 25 fully-loaded instances of Kontakt open, with mastering tools active, while mixing and tracking. I never had a crash or heard a CPU clip—not even once. I don’t know who your programmers are, but I owe them a beer for sure. [Editor’s note: it’s these guys.] After many late nights of tracking and mixing, I was able to deliver a product I was proud of, and help bring a legendary gaming company I grew up with back to life. Studio One is quite literally helping my dreams come true.

Studio One came to kick ass and chew bubble gum… and it’s all out of gum.

The 3D Realms Anthology is a download-only 32-game collection – that’s the entire 3D Realms library (excluding Max Payne and Prey) brought together by a brand-new, custom-made Anthology launcher built to run on Windows.

You can buy the game compilation (download-only) here.

You can buy the soundtrack here.

Here’s a trailer for the soundtrack:

and here’s a trailer for 3D Realms Anthology itself:

Posted in Artist, Studio One | 143 Comments