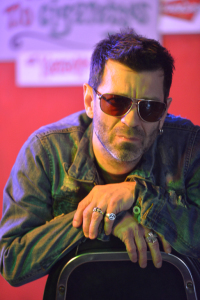 In an ecologically conscious 2014, it might be less than PC to acknowledge that demons are the most efficient fuel for a songwriter’s fire. But Travis Meadows, who grew up hard in Jackson, Mississippi, probably isn’t too worried about that. Now hailing from Nashville, Meadows has spent the last couple of  decades grabbing his demons by the neck and throwing them into his personal incinerator. Who ya gonna call?

The result is a school of gritty, haunted country rock that harkens back to a time before mainstream country went paradoxically digital. Travis’ three offerings on Nimbit are more about spit than polish, and in era where “wild” songbirds are getting their chirps Auto-Tuned, a little bit of Meadows straight-shooting is just the rooster-cry CM needs right now. While his repertoire leans heavily on emotive ballads that may belie his 5-o’clock shadow/sunglasses after dark image, there’s also a weighty darkness in creepers like “Good Country People” that offer a stirring window to another side of Travis’ soul. His lyrical content is deeply personal, acknowledging his win over cancer, the loss of his leg, and victories over a few different kinds of bottles. Heartstrings tugged hard enough to snap.

Travis was decorated in 2001 with ASCAP’s Christian Music Award, and has landed eight Top 20 singles in the Contemporary Christian genre. He’s also found success in lending his songs to other performers, including the title track of Dierks Bentley’s latest album, Riser. He’s also a staff writer at Universal. Writing collaborators include Lynard Skynyrd, Lee Ann Womack, and Jake Owen, and Adam Brand. He’s the subject of a recent feature in Rolling Stone as Nashville’s Hottest Songwriter, and is featured in this duet with Jake Owen,”What We Ain’t Got.”

Travis has cherry-picked a fine lineup of session players to round out these records; highlights include some excellent flourishes of organ and pedal steel on “Play with Fire” from My Life 101. Said additions enhance the record in a manner that’s not over-the-top or distracting from what’s important here: the stories. That said, critical listeners will not overlook the caliber of these performances. There’s not really any showboating here, but they’re strong enough to make a listener think “I’ll never be good enough to play that.” Not to say that Travis’ chops as a guitars and vocalist couldn’t carry these records alone—they can—and on more restrained tracks (“Lonely Like This,”) they do. Dusty without the rusty.

My Life 101 concludes with one of the more stirring renditions of “Amazing Grace” that I’ve heard in a long time, a suitable counterpoint to some of the rough-and-tumble ruckus of the previous tracks.

Travis’ Nimbit profile boasts not only three full-length albums and his tour schedule, but also four live performance videos—something that we don’t see enough of on these profiles, so take note!