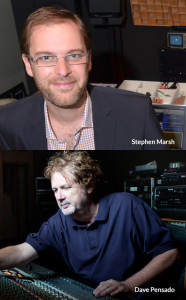 Dave Pensado is a Grammy-winning mix engineer and the host of pensadosplace.tv. His extensive list of credits include Beyonce, Christina Aguilera, Kelly Clarkson, Mariah Carey, Elton John, Michael Jackson, and way more. We’re flattered to know that Dave has been using the Sceptre S6s on his productions of late, and will join us to talk about them on Friday.

Stephen Marsh (Chief Mastering Engineer at Marsh Mastering) has been fortunate enough to count Grammy winners, multiple gold and platinum albums, and numerous chart successes among the thousands of releases to his credit. His Audiophile Remastering credits include Bob Dylan, James Taylor, The Byrds, Nat King Cole, Neil Diamond, and many other legendary artists. Of late, he has had some very kind things to say about the Sceptre monitors, and he will be happy to discuss them in further detail with you at AES on Saturday.

If you’re going to be in the area, come on down. Today is your LAST CHANCE FOR FREE TICKETS, click here to get yours.