New PreSonus HQ is Coming Along…

So, we’re growing. Like, bursting-at-the-seams-growing, and have become a little too big for our britches. Sure, all the jambalaya and Mountain Dew consumption around the Baton Rouge office is clearly a factor, but the real issue is that we’ve simply hired a lot of people to do a lot of work, and now there’s too many people to fit into our current facility. It’s like a pro-audio clown car up in here. We’re gonna need a bigger boat.

In my role as the Social Media Manager for PreSonus, I work from my home in the passive-aggressive capitol of the world, Seattle. Fact is, the only reason I haven’t moved to Baton Rouge yet is because Ron says “We’d love to have you here, but there simply isn’t anywhere for you to sit.” So, I’m glad to see they’re workin’ on it, because I’m overdue for some Crawdad and Three-Cheese Baked Macaroni and kindness from strangers.

While this might appear to look like some concrete in a muddy field, this is a big step toward arriving in our new home. Look at it as the architectural equivalent of having gotten our drums tracks committed to tape, and we just called our first-call bassist to come do his job.

We’re hiring for more positions to come, by the way. 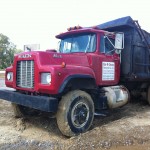 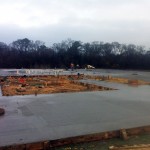 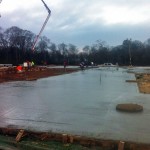 Posted in Just for Fun | 238 Comments